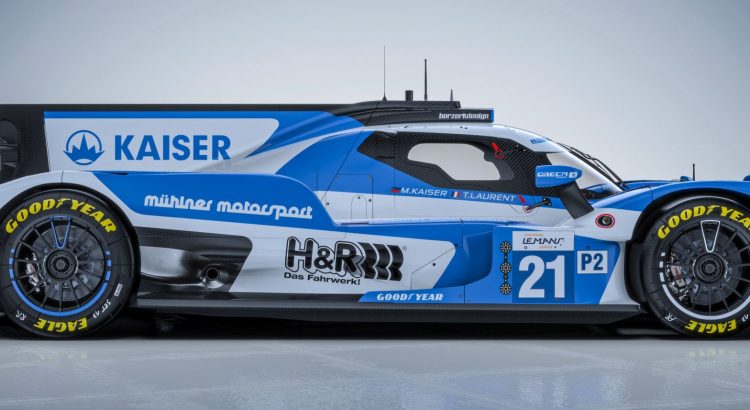 The team from the Belgian Ardennes presents itself at the ELMS weekends with a total of 3 Duqueine D08 LMP3. Two of them will participate as before in Michelin Le Mans Cup; another one in the ELMS like the LMP2.

It’s great news: Mühlner Motorsport will be represented in the Michelin Le Mans Cup in 2022 for the third year running two Duqueine D08 LMP3 vehicles. Now the Belgian racing team is shifting up a gear: A brand new Oreca 07 LMP2 is entered in the PRO category of the ELMS for Matthias Kaiser, Thomas Laurent and another professional driver who has yet to be announced.
“For more than 4 decades now, we have been continuously setting ourselves new challenges,” explains Bernhard Mühlner after his return from Daytona. “Actually, we wanted to start in the ELMS last year already. However, we were too late and all starting places were taken. This time we submitted our application already last November.”
In recent years, Mühlner Motorsport has been able to impressively prove how successful the two prototypes are in the Michelin Le Mans Cup, e.g. in 2021 in the main race of the “Road to Le Mans” event with Ugo de Wilde and Moritz Kranz. In 2022, two more blue and white prototypes will take part in the six races of the European Le Mans Series (ELMS). While the driver pairing for the LMP3 has not yet been finalized, two of the three drivers for the LMP2 can already be presented. Mühlner Motorsport is the only team that will compete in the colors of the Belgian flag at the ELMS.
“We are very proud and happy that we were able to sign silver driver Matthias Kaiser for our program. Matthias already gained experience with the LMP2 in the Asian Le Mans Series last year. At his side, Frenchman Thomas Laurent will take the wheel. Thomas already made his mark as a series runner-up in 2017, underscoring that with his second place overall at the 24H du Mans. At that time he fought bumper to bumper with the LMP1 from Porsche and Toyota”, Bernhard Mühlner emphasizes the decision. “The name of the third driver will be confirmed shortly. We are in close negotiations with several pilots. Our goal is to form a team that can drive far ahead in the championship. This is one of the reasons why we are currently restructuring our team.”
Matthias Kaiser (31) is very happy to be part of Mühlner Motorsport’s LMP2 program. Most recently, he was with Graff in LMP3 categories and was able to celebrate three podium finishes with Phoenix in the 2020/21 ALMS in an LMP2.
“It’s a logical consequence for me,” says the racing driver from Liechtenstein. “I’m looking forward to being able to compete in this program together with Mühlner Motorsport and I’m looking forward to the first tests. We are certainly newcomers to the new combination and will not come to the race track in the role of favorites, but if everything goes well we will certainly be able to cause a few surprises.”
With his extensive experience, Thomas Laurent is spearheading the new LMP2 team. The 23-year-old Frenchman says: “I’m extremely happy to return to endurance racing after a year and look forward to the new challenge. I want the team and my teammates to benefit from my experience. We will position ourselves well and then grow bit by bit. I think that with the new car and the great driver line-up we have the chance to finish on the podium a few times in our first year with Mühlner Motorsport.”
The first LMP2 tests are scheduled for the second week of March, just before heading back to the Sebring 12h across the Atlantic. The season in the USA (IMSA WeatherTech Sportscar Championship and IMSA Prototype Challenge) already started in January in Daytona. After Sebring, the first round of the Nürburgring Endurance Series will take place, where Mühlner Motorsport will continue to run Porsche 911 GT3 and Cayman GT4.

Please send your meaningful application with passport photo and your DOB