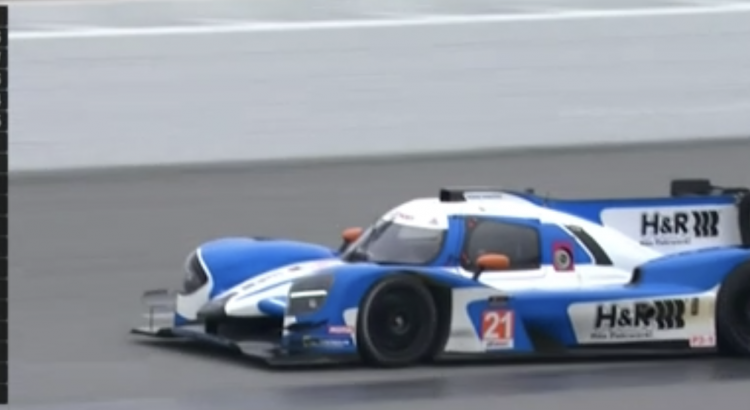 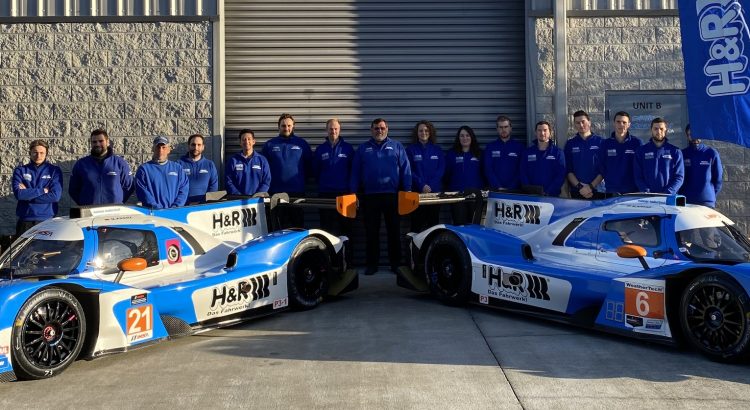 Daytona / DeLand. Muehlner Motorsports America, based in DeLand / Florida just minutes away from Daytona International Speedway, is well prepared for “Double Duties” the two weekends ahead.

With one Duqueine D08 (#21) Moritz Kranz and Laurents Hörr (both from Germany) will participate in the IMSA Prototype Challenge. The first round of the 2021 season will be held at the so-called ROAR this weekend.

Hörr proved being one of the fastest LMP3 drivers out there by winning the ACO Michelin LeMans Cup in Europe 2019 and 2020. Kranz more known for his successes in GT with Porsche, came to the Le Mans Prototype scene only last year. He adopted very fast and showed impressive speed. He put the Muehlner Duqueine D08 in 3 out of 6 rounds in the front row of the grid. 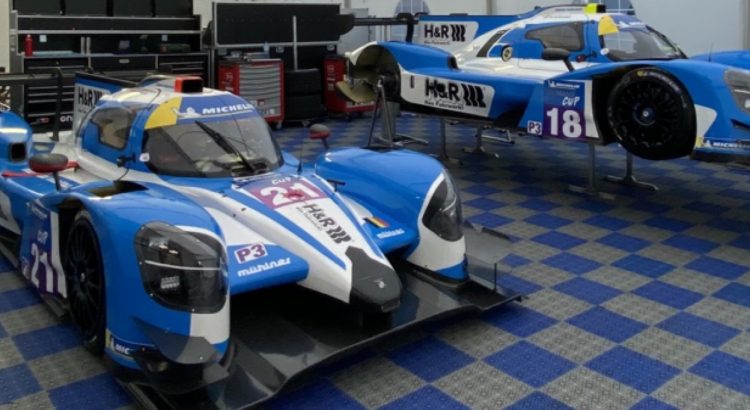 In Europe the Cayman GT4 races on the Nürburgring Nordschleife will be continued. With three Championships won in the last four years, the goal here is clearly set: attack the Championship again!

Further programmes with Porsche in other series on both sides of the Atlantic are also planned.

In the prototype sector, Mühlner will really expand on both sides of the Atlantic: Duqueine D08 LMP3 cars will not only be entered in the IMSA Prototype Challenge, but also in the IMSA WeatherTech Sportscar Championship. Already in January the so-called “ROAR before the 24h” in Daytona will kick off for both series. The legendary 24-hour race in Daytona, the “Rolex 24”, will take place just one week later.

In Europe, two Duqueine D08 LMP3 cars will participate in the Michelin LeMans Cup and another D08 LMP3 in the European Le Mans Series.

Later in 2021, the next step in the LMP programme will be taken: first tests with a newly acquired LMP2 and maybe participation in the season finale of ELMS at Portimao. All in preparation for the Rolex 24 at Daytona in January 2022, the ELMS season and the 24h of Le Mans! 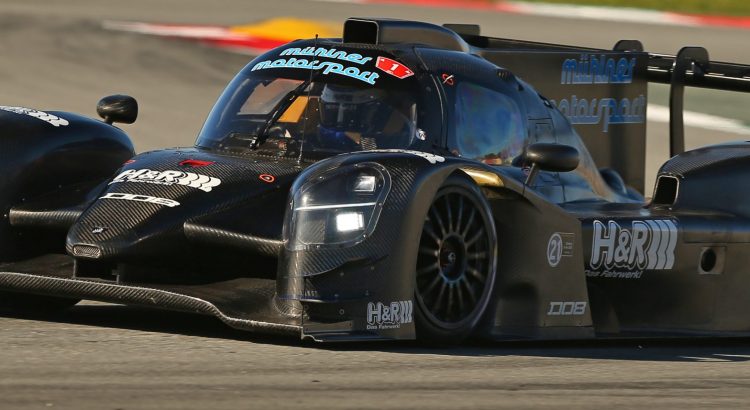 The Mühlner Motorsport Team, which has been internationally very successful for decades, with its headquarters in the Belgian Ardennes in the immediate vicinity of the Formula 1 Circuit Spa-Francorchamps, has set the course for the new decade and will considerably expand its already extensive activities.

In addition to participating in Cayman Trophy and the Carrera Cup in the Nürburgring Endurance Series and the ADAC 6- and 24-hour races at the Green Hell, as the Nordschleife of the Nürburgring is also respectfully called, Mühlner Motorsport will also compete in other classes this year. For example, a Porsche 911 GT3 (Model 991 Gen2) will race in the SP7 for improved cars up to 4,000ccm, after a sovereign class win in this class at the ADAC 24-hour race 2019. Intensive negotiations are underway with interested drivers regarding the use of additional vehicles in other classes.

“As a motorsport team, we respond to the demands of our customers and check whether a project makes sense primarily from a sporting point of view but of course also from an economic point of view. If this is the case, we are happy to expand our range. Interested drivers can contact us at any time and discuss their ideas with us,” explains Bernhard Mühlner.

In addition to the activities on the Nürburgring Nordschleife, which in 2020 will also include appearances in the Rundstrecken Challenge Nürburgring RCN, Mühlner Motorsport also participates in the Porsche Sports Cup PSC and is also expanding its Clubsport activities with its presence at Track Days, where driver coaching is also offered. The Clubsport department “M-Service” also looks after customer owned race cars.

“Participation in the RCN and the PSC rounds off our range of services at the lower end, so that we can also offer programs to newcomers, e.g. from our Clubsport clientele,” Bernhard Mühlner explains.

Furthermore, Mühlner Motorsport is also planning guest starts in the ADAC GT4 Germany and the SRO GT4 European series. At a guest start in Spa-Francorchamps in 2018, Moritz Kranz was able to drive to the podium. Also in North America, the Muehlner Motorsports America Team, located in Florida in the immediate vicinity of the Daytona International Speedway, has successfully participated in GT4 series of the IMSA and SRO World Challenge since 2016.

Also based on the experience that Mühlner gained in North America, when two Norma M30 LMP3 cars were run very successfully in the IMSA Prototype Challenge in 2019 (3 x pole position / 2 x overall victory / runner-up in the drivers’ championship), Mühlner Motorsport now plans to race with LeMans Prototype cars in Europe, the direct successor of the Norma M30, which is now called Duqueine D08.

“We are in negotiations with interested drivers to participate in the ELMS, the Michelin LeMans Cup and / or the Ultimate Cup with LMP3 vehicles around 2020. After our successes in North America it was a logical step to enter the LMP sector in Europe as well”, Bernhard Mühlner explains the background.

Not only are extensive programs planned for 2020 on both sides of the Atlantic, but the course has already been set for 2021 and beyond: Mühlner is already preparing the re-entry into the Porsche one-make series.

“Our last appearance in the Porsche Supercup so far was the 2014 season finale at the Circuit of the Americas (COTA) in Austin / Texas. For 2021, Porsche will change models to the new Porsche 911 GT3 Cup based on the 992 and this is the ideal time for us to re-enter the Porsche one-make series. Besides our other programs we will enter two new 911s each in the Porsche Carrera Cup Deutschland (PCCD) and in the Porsche Mobil 1 Supercup (PMSC) in 2021. Muehlner Motorsports America will most likely also participate in the new Porsche Carrera Cup organized by IMSA in the USA”, Bernhard Mühlner already gives an insight into the 2021 season and beyond.

Of course Mühlner Motorsport and Muehlner Motorsports America also have their eyes on the still booming GT3 market. From 2004 to 2015, the Mühlner Team was very successful in international GT3 races (4 x GT3 overall victory at the 24 hours of Spa-Francorchamps). In the ADAC GT Masters in 2008 Tim Bergmeister won the drivers’ championship and also the races in the FIA GT3 European Championship, the Grand-Am, IMSA, World Challenge and the FIA GT World Championship, where Mühlner Motorsport won the home race in Zolder, Belgium, in 2012, were very successful.

“Certainly we are watching the GT3 scene in Europe and North America as well as worldwide (SRO Intercontinental Challenge) very closely and would like to participate there again. But it must not only be sportive but also economical. You can only be successful with a sufficient budget and success is of course the highest priority for us as a professional racing team”, Bernhard Mühlner puts on record. 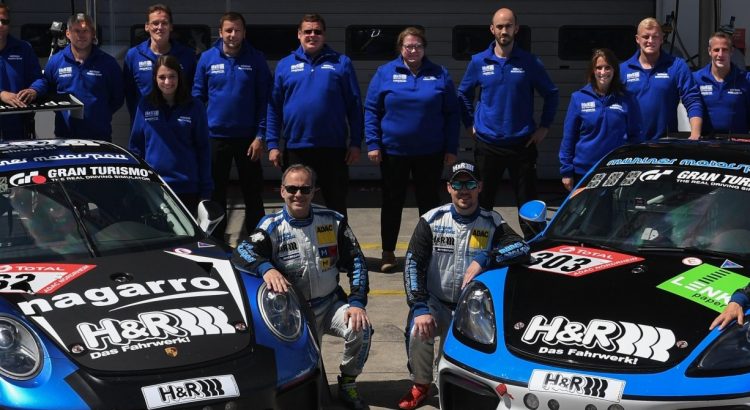 With more than 40 years of experience in Motorsport (Rallye and Racing) the Team around Renate-Carola and Bernhard Muehlner is your partner when it comes to successful and reliable racing!

Since 2010 Muehlner Motorsports America is racing in Grand Am, IMSA Championship and Challenge and World Challenge America.

More than 300 podium results, nearly 150 victories and the experience of 800 races: Muehlner Motorsport provides cars that are prepared perfectly for the high demands of racing, so that you can enjoy your “Endless Summer” to a full extend!

Take advantage of the “Driver Development” program of Muehlner Motorsport: professional drivers and driver coaches, successful in national and international racing, will be able to provide detailed video- and data analysis with Race Navigator and Cosworth Hard- and Software to make you a faster and safer driver!

Track support and engineering is also provided by Muehlner Motorsport: Service for brakes, tires, suspension and to work out of the perfect setup are available for “Endless Summer” and “GT Winter-Series” as well.

We are looking forward to see you! 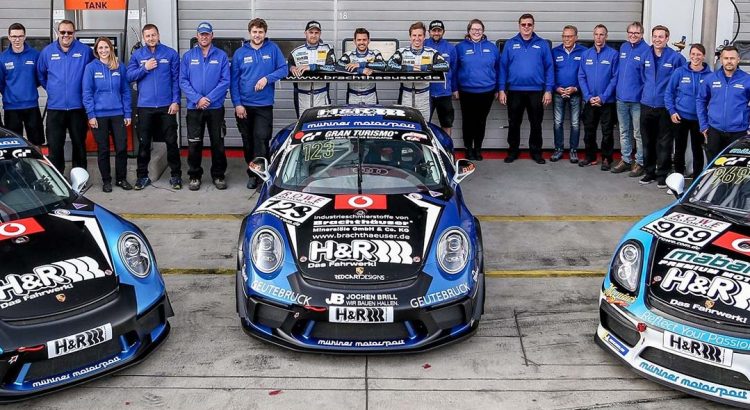 With more than 40 years of experience in Motorsport (Rallye and Racing) the Team around Renate-Carola and Bernhard Muehlner is your partner when it comes to successful and reliable racing!

Since 2010 Muehlner Motorsports America is racing in Grand Am, IMSA Championship and Challenge and World Challenge America.

More than 300 podium results, nearly 150 victories and the experience of 800 races: Muehlner Motorsport provides cars that are prepared perfectly for the high demands of racing, so that you can enjoy your “Endless Summer” to a full extend!

Take advantage of the “Driver Development” program of Muehlner Motorsport: professional drivers and driver coaches, successful in national and international racing, will be able to provide detailed video- and data analysis with Race Navigator and Cosworth Hard- and Software to make you a faster and safer driver!

Track support and engineering is also provided by Muehlner Motorsport: Service for brakes, tires, suspension and to work out of the perfect setup are available for “Endless Summer” and “Winter GT Series” as well.

We are looking forward to see you! 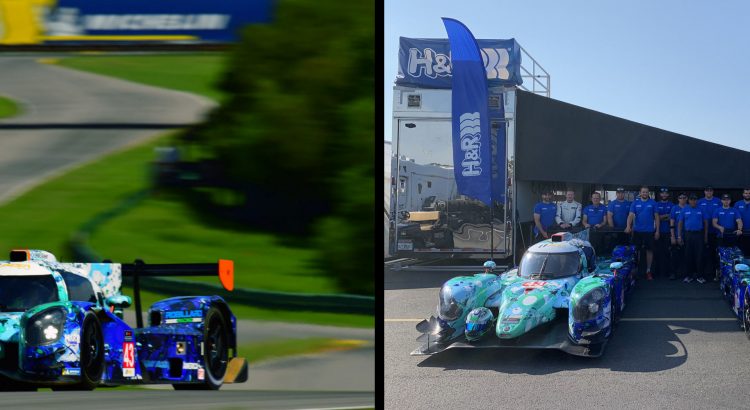 After Sebring McAleer was also able to win round 5 at the Virginia International Raceway. Before the last round at Road Atlanta in October, McAleer is now 3rd in the points. 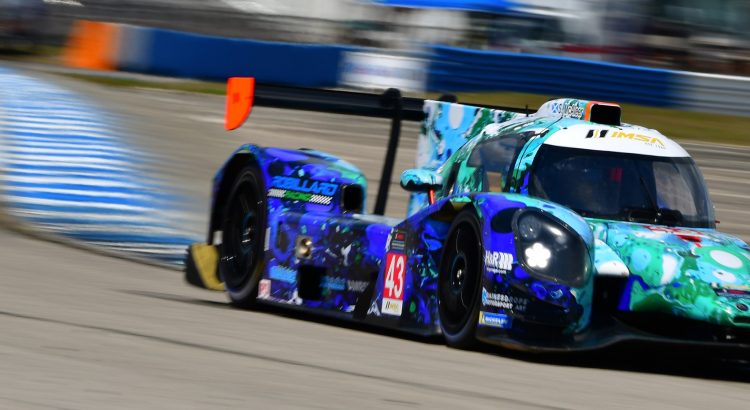 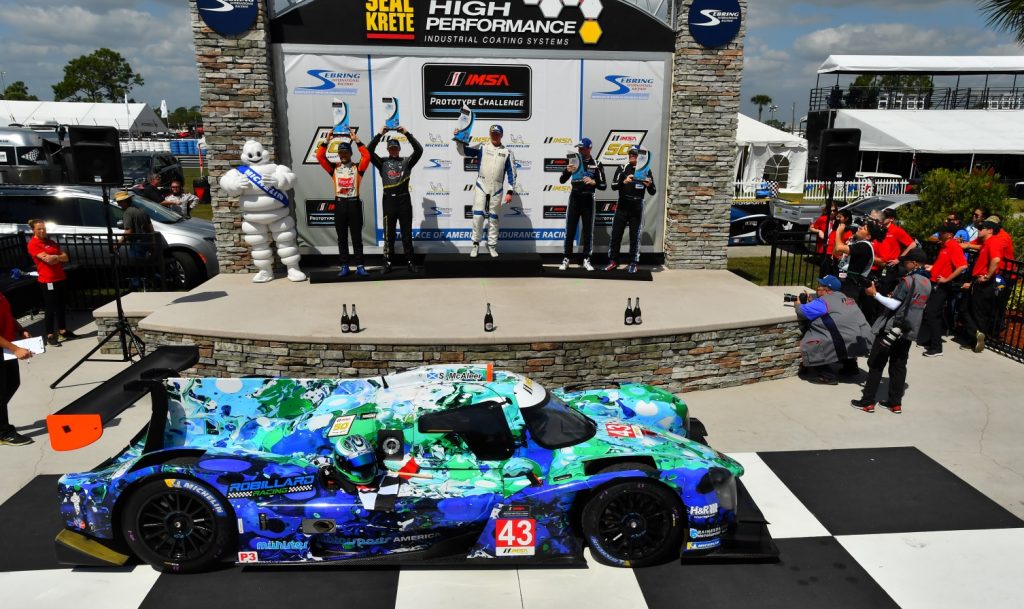 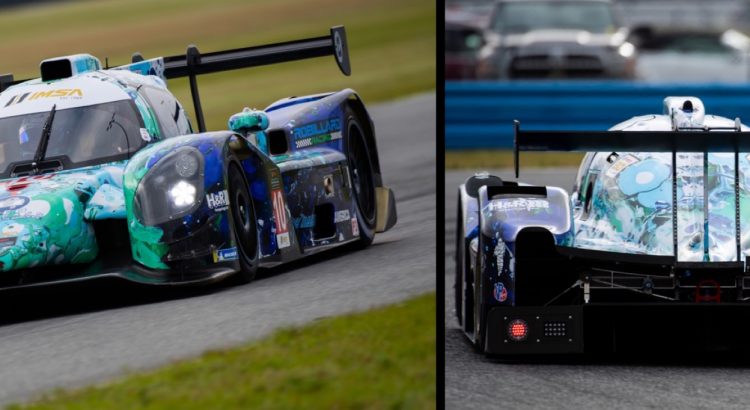 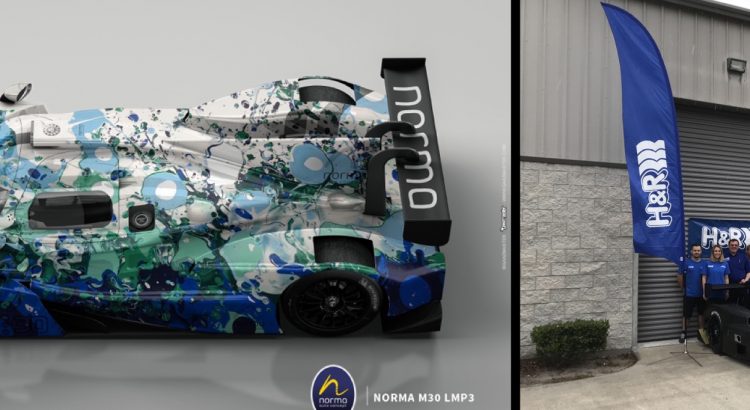 Robillard Racing and Muehlner Motorsports America are pleased to announce they will be entering a full season in IMSA Prototype Challenge with two Norma M30 LMP3 prototypes.

Although the team name is new to the IMSA paddock everybody involved with the ambitious program has vast experience in professional racing including IMSA in particular.  Driver and team owner Joe Robillard will again be joined by last year’s team mate in IMSA’s GS Class, Stevan McAleer, in a great combination of tenacity and enthusiasm.

McAleer’s excitement is clear: “What a cool step to take for 2019.  It’s been a long time since I’ve driven a true downforce car but I am confident that I can adjust quickly and fight for the IMSA LMP3 championship out of the box. Ecstatic is an understatement and cannot wait to get going!!!”

Joe Robillard is equally excited: “Moving back to purpose-built, downforce car is very exciting.  So far in testing, the Norma is amazing, and the first race can’t come soon enough.”

On the technical and managerial side of the effort will be seasoned engineer Marc Manning who has a vast resume in prototypes, sportscars, and formula cars.  Bernhard Mühlner and his team from DeLand, FL are excited to bring a wealth of championship winning experience to the program.

“I am extremely pleased in so many aspects of this program.” said Manning.  “The enthusiasm exhibited by Joe Robillard is contagious and has opened a new and different chapter in my career.  It is rewarding to keep learning rather than stagnate with a notebook of old notes and keep trying more things more often”.

It was this reasoning that led Manning to call Bernhard Mühlner.  He and Manning have worked together and learned to utilize each other’s strengths.  At St. Pete earlier this year, they achieved two pole positions, two fastest laps, and two podiums the first time out.

Manning said, “Bernhard has a proven race winning organization, so there was a natural connection to Robillard Racing’s aspirations, and a home away from home for us in Europe in the future.”

IMSA Prototype Challenge consists of two 3-hour races and four 1-hour 45-minute races.  The team will field a shared car for the two longer races, and two individually driven cars for the four shorter races.  The team recently returned from the Michelin Test day at Daytona International Speedway and were thrilled with the performance of the Norma M30. 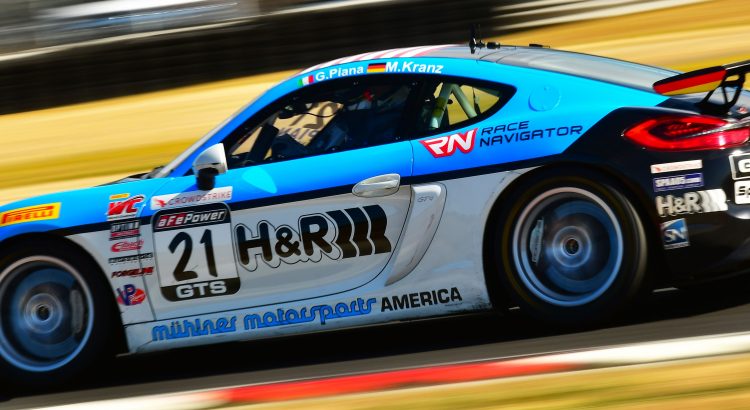 Round 4 of the Pirelli World Challenge GTS SprintX Series went not according to plan.

Moritz Kranz was able to secure a top 10 spot on the grid for race 1 but an unlucky penalty in the 2nd half of the race after the pitstop ruint the result: P13 from 33 cars.

Race 2 was even worse: Kranz could not avoid an accident and finished finally only 16th from 31 cars.

Because of the huge damage the team decided not to participate in round 5 of PWC GTS SprintX Series at Utah.

Already now Muehlner Motorsports is working on programs for the 2019 season in PWC GTS and the PWC GT4 Series East. 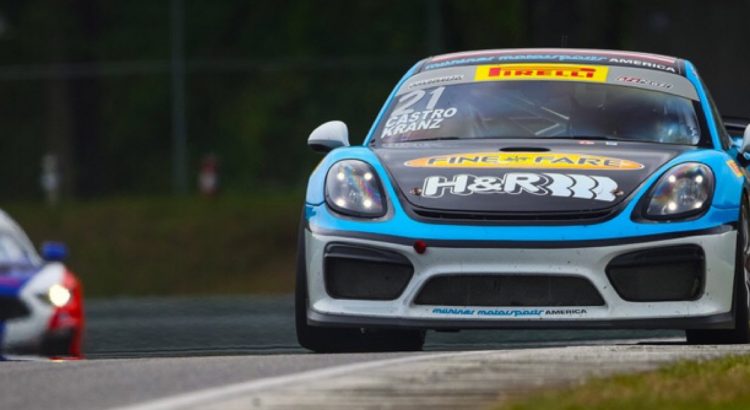